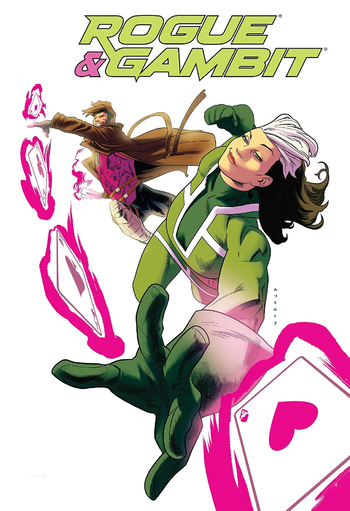 Working with the X.
Advertisement:

Rogue & Gambit (collected in trade as Rogue & Gambit: Ring of Fire) is a 2018 Marvel Comics limited series written by Kelly Thompson and drawn by Pere Perez, published as part of the Marvel Legacy initiative.

When Cerebra detects multiple mutants simply vanishing after visiting Paraiso Island, an island resort in the Atlantic offering to "free mutants of their trauma", Headmistress Kitty Pryde sends ex-lovers Rogue and Gambit to investigate, as they are the perfect covert agents to infiltrate the resort under the guise of pursuing couples' therapy.

Sounds simple enough, but then again, what's ever simple with Rogue and Gambit...

After a five-issue run, Rogue and Gambit was followed by an ongoing sequel series titled Mr. and Mrs. X, which follows the two in wedded "bliss" after their impromteau wedding in X-Men: Gold, with Thompson returning to write.