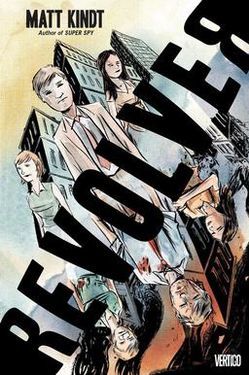 Revolver is a graphic novel created, written, and drawn by Matt Kindt, and published in 2010 by Vertigo Comics.

Sam is an ordinary guy stuck in a white collar hell; he hates his job, his boss is a bitch, and his girlfriend is a materialistic airhead. After once again drinking himself into a coma, Sam wakes up one morning and finds that the world has gone to hell literally overnight. An avian flu pandemic has killed millions in China, Seattle has been wiped off the map by a dirty bomb, and America's infrastructure has collapsed...

Except none of it happened? When Sam wakes up the next day, everything is back to normal. But when he falls asleep again, he's back in that Crapsack World. Sam quickly finds himself living each day twice in a row; once in a world where it's kill or be killed and anything goes, and once in a world where he's completely safe but sleepwalking through his life.

So which one does Sam want to stay in?