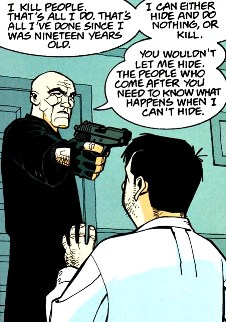 It's seriously all he does.
I am haunted by everything I have done. I have shot women in the back. I've blown men's brains out over their wives. I've made children watch their parents bleed out in the street. I did these things because it was explained to me that America would not remain safe otherwise. These are the hard choices. And make no mistake, I will go to my grave regretting the horror I have spread. But I am not a monster because I kill. Killing is easy. I am a monster because I accept the hard choices. I am a monster because I see that my actions in the service of my people will cause nothing but terror and pain. And I do them anyway. I am very good at terror and pain.
—Paul Moses
Advertisement:

Red was a three-issue comic book miniseries written by Warren Ellis, released from September 2003 to February 2004 for WildStorm. It tells the story of Paul Moses, a retired CIA operative who was at one point the most dangerous man in the world, spending his remaining days trying to live with the things he has done. He is responsible for a nearly impossible number of atrocities and assassinations committed over a forty year career working in the interest of national security.

A new director is appointed to the CIA named Michael Beesley, a naive overconfident politician with little military experience. The Deputy Director, Adrian Kane, briefs him on his first day and informs him of Moses' career, and the extent of it. Beesley freaks out upon discovering not only the sheer number of high profile assassinations, but also that the man who carried them out is still alive, and worries what might happen if his crimes are ever exposed to the public. To bury the past, he orders the death of Paul Moses, over the protests of Kane, who insists that Moses is nowadays just a harmless retiree, who wouldn't dream of betraying the agency.

Returning home one night to find a highly trained squad of professional killers waiting for him in his living room, Moses brutally kills them all. He recognizes their attack patterns, and realizes that he has been betrayed by his former employers. After grabbing all of the weapons he can carry, he places a phone call in, putting himself back on red status, making him an active agent again. He then announces that he will personally kill the men responsible for disrupting his peaceful life, in addition to everybody else working for them who so much as knows his name.

The book was published under Wildstorm's more writer-driven Homage Comics imprint. Although it wasn't widely popular, Red met with critical acclaim when it was first published, and became a cult hit. Bruce Willis also plays the main character in a 2010 film adaptation, which... on the one hand, appears to play the thing for comedy, and on the other hand, has Helen Mirren manning a Ma Deuce. And Warren Ellis has at least thrown his backing behind it, on the grounds that the original graphic novel might have hit "44 minutes, if you included a musical number."

This WildStorm volume contains examples of: