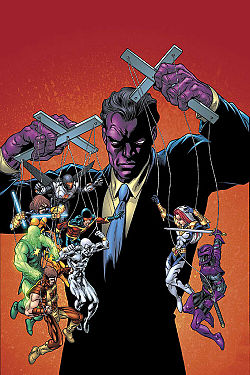 The Purple Man (Zebediah Killgrave) is a fictional character, a supervillain appearing in American comic books published by Marvel Comics. Created by writer Stan Lee and artist Joe Orlando, he first appeared in Daredevil #4 (October 1964). His body produces pheromones which allow him to verbally control the actions of others. Initially a recurring enemy of Daredevil, he later emerged as the archenemy of Jessica Jones.

Originally a spy, Zebediah Killgrave got into an accident with chemicals which... well... turned his skin purple. As a side effect though, the chemicals gave him the power of mind manipulation, able to have people believe him or follow his commands without much effort on his part. Now able to take whatever he wanted, Killgrave gave up being a spy, instead taking up a full life of crime.

A master manipulator with purple skin and the power to force others to do his bidding, Zebediah Killgrave is a professional criminal with a long list of nasty habits. He's clashed with Daredevil repeatedly and has always been frustrated by the fact that his commands do not effect the vigilante to the same degree that they do the general populace.

A version of the character appears in the Netflix series Jessica Jones (2015), set within the greater Marvel Cinematic Universe continuity. This version is portrayed by David Tennant.