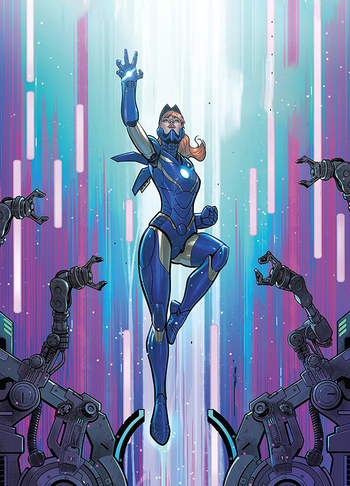 "I have to accept that you're gone. And if I can't save you, then I have to save the world from what you've become. I bought one of the largest media companies on Earth from under you. I'll use it to sink your drug, Extremis, and I will show the world the monster you've become. They will all know your imperfections, Tony. You won't be their messiah anymore. Your zealots, so blind to the truth. I will open their eyes. Whatever you do from now on, you will do it without admiration, without those who once respected you. You will do it without your friends. You might still manage to force your arrogant vision onto the world. But you will do so broken, unloved... And completely alone."
— Pepper Potts, Superior Iron Man #9. (Thankfully, this is no longer the case.)

Virginia "Pepper" Potts is a Marvel Comics characters who mainly appears as supporting character in Iron Man comics. She is created by Stan Lee and Don Heck, and is introduced into Marvel Universe in Tales of Suspense #45 in 1963). As Rescue, she's introduced in The Invincible Iron Man #10 in 2009.

Pepper is Tony Stark's secretary, assistant, and longtime friend. She was working for Stark Industries and spotted an accounting error. She raced to let Tony Stark know. Having saved the company a large amount of money, Stark promoted her to be his personal assistant. Over the years, she developed romantic feelings on her womanizing boss to the point that she rejects the advances of Stark's chauffeur and assistant Happy Hogan. As Stark's affection for her grows, she becomes part of a love triangle between the two men, but eventually falls in love with and marries Hogan. Although Pepper and Happy soon divorce after she has an affair with a former college boyfriend, she and Happy join Tony at his new company, Stark Solutions. During their time in Stark's new company, Pepper and Happy once again became involved and they remarry. But Happy eventually dies after he is massively injured by the supervillain Slaymaster during Civil War, and once again Pepper has on-off relationship with Tony. Half the time they're together, the other half they're pretending they weren't.

After Civil War, Pepper joins the Fifty State Initiative as a member of The Order. She assumes the moniker of the Greek goddess Hera, and uses advanced computer hardware and prosthetics to monitor and coordinate the team's missions. Upon the absorption of The Order into the Initiative, Tony Stark offers her a job on the special projects team at Stark Enterprises, which she accepts.

When Pepper is caught in a terrorist explosion caused by Ezekiel Stane, she sustains multiple internal injuries, including shrapnel wounds, and rendered unable to withstand a prolonged surgery. In response, Tony embeds a strong magnet (similar in appearance to the arc reactor) in her chest, essentially turning Pepper into a cyborg dependent on keeping her chest magnet engaged to stay alive, as he was once. She eventually gains a suit of armor (and a heart implant) of her own as the heroine Rescue. Pepper's body is further enhanced with new cybernetics and upgrades to the magnet, which are based on Danny Rand's battery designs, and give Pepper new super abilities.

When Tony is blamed for the Skrull invasion of Earth that occurs in the Secret Invasion, S.H.I.E.L.D. is taken over by Norman Osborn, replaced with H.A.M.M.E.R., Stark makes Pepper the new CEO of Stark Industries, trusting only her to shut down the company in his absence. Pepper discovers a secret room in Stark's office which contains a suit of armor that he made especially for her, which she uses under the name Rescue. She becomes a superheroine herself and rescues Black Widow and Maria Hill from Osborn's imprisonment. As Rescue, she has her own single-issue comic, Rescue which is published in 2010.

After her heart-mounted repulsor generator and armored suit are dismantled to reboot the brain-dead Tony Stark, Tony reinstalls a new Repulsor Tech node in her chest and gifts her new Rescue armor, complete with the A.I. J.A.R.V.I.S.. Unfortunately, after J.A.R.V.I.S. had revealed that it developed romantic feelings for Pepper, it kidnapped her to keep her away from super heroic duties, but was deactivated by James Rhodes, who assumed the Iron Man identity at the time, and was finally destroyed by Pepper Potts in Resilient's factory along with Potts' Rescue armor, thus leaving her heroic alter-ego behind.

She later gets new Rescue armor in the Superior Iron Man comic.