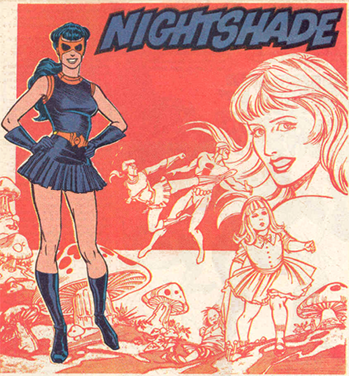 Nightshade is the superhero name used by Eve Eden, initially a supporting character in Captain Atom over at Charlton Comics. The rights to the character were bought by DC Comics along with other characters in Charlton's Action Hero lineup when the company folded in 1983. She was subsequently integrated into The DCU following Crisis on Infinite Earths. She and her alternate universe equivalents have been on many teams. Her code-name has also been used on a handful of briefly appearing male villains. The Justice Society of America villain who went by Nightshade and later changed his name to Ramulus predates her by about twenty-four years.

Eve Eden is the daughter of a senator and an extra-dimensional queen who inherited the ability to manipulate shadows and slip through the Shadows to other realms from her mother. Her mother was the deposed queen of the Land of the Nightshades who had been forced from her lands in a coupe which resulted in the death of the rest of the royal family. Eve has worked with many teams and organizations as she strives to use her powers for good, having moved to Washington DC to become a legitimate hero and offer her services as a government agent. Among the many teams and organizations she's been part of are the Central Bureau of Intelligence, Task Force X, Living Assault Weapons (L.A.W.), InterC.E.P.T., and Shadowpact.

An Elseworld's version of Eve was the title character of JLA: Destiny, where she changed her name from Nightshade to Destiny after seemingly developing new powers in the wake of her husband's disappearance.