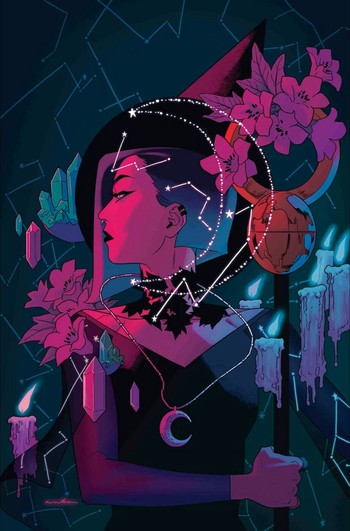 Nico was an ordinary Japanese-American teenager with ordinary parents... or so she thought. One night, while hanging out with the kids of her parents' friends as they do annually, Nico and the others discover something shocking: their parents are a cult of supervillains called The Pride.

Moreover, Nico learns her parents are actually dark wizards, and she comes into the possession of her mother's Staff of One — a mystical artifact that casts spells once ever, and only when its user sheds blood. With the Staff in tow, Nico and her fellow runaways flee home, hoping to correct the moral wrongs of their parents.

Upon discovering her maybe-boyfriend Alex Wilder is actually a mole serving their parents and defeating him, Nico becomes the Runways' new leader. Over the next few years, she and the Runaways clash with the Young Avengers during the first Civil War, gain (and lose) a few members, and make it through the Secret Invasion.

Some time later, Nico and Chase Stein (another Runaway) are abducted by the supervillain Arcade and forced into the Avengers Arena, where she and other young characters of the Marvel Universe (like X-23 and some of the Avengers Academy) must kill (or be killed) in order to escape. Nico actually dies at one point during this ordeal, but thanks to the Staff of One, her death isn't permanent. With the help of Chase and their fellow captives, most (but not all) of them manage to make it out alive.

But Wait, There's More! Months after escaping Arcade's Murderworld, Nico is understandably distraught, having quit the Runaways and condemned Chase for becoming a media sensation in light of those events. When she and the other survivors find Cullen Bloodstone (another Murderworld escapee) conspiring with the Masters of Evil in Bagalia in order to take revenge on Arcade, Nico is reunited with a resurrected Alex and very nearly seduced to joining the dark side with him. After months of struggle, Nico and the survivors are rescued with the help of S.H.I.E.L.D..

When the Marvel Universe is destroyed by a final incursion with Earth-1610, another Nico exists in the Arcadia region on God Doom's Battleworld, and serves on their team of law enforcers called A-Force. Alongside She-Hulk, Medusa, Dazzler, and a cosmic entity called Singularity, they investigate the wrongful arrest of America Chavez and take down the amoral Lady Loki.

When the Marvel Universe is restored, Singularity (who migrated from Battleworld to Earth-616 in the wake of the Siege on God Doom) locates her friends from Arcadia — despite none of them remembering Battleworld, or Singularity herself — to reform A-Force. Together, they meet Dazzler Thor (another Battleworld holdover) and start adventuring together.

Unfortunately, they soon get drawn into Civil War II, which starts with She-Hulk (their leader) being put in a coma. Afterwards, Nico winds up living on her own again, at a loss for anything to do...until Chase shows up with an unexpected guest, kick-starting a new Runaways series.

Outside of the comics, Nico joined the Marvel Cinematic Universe in Hulu's Runaways (2017) released in November 2017, played by Lyrica Okano. Interestingly, Nico's mother Tina (in a nonspeaking cameo role) appears in 2016's Doctor Strange (2016), played there by Linda Louise Duan, as well as in the Doctor Strange Prelude comic. In the actual series, however, she is played by a different actress, Brittany Ishibashi, and given an entirely separate storyline.