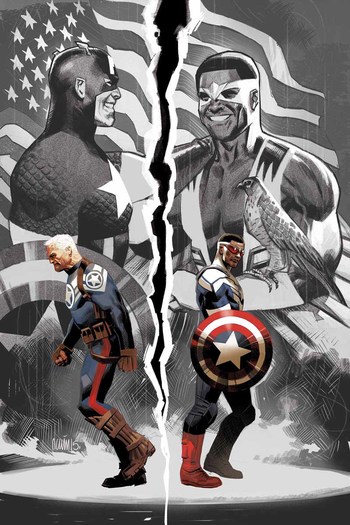 The old and the new.
"Let's just be honest here — this country is as divided as it's ever been. Red and blue, black and white, Republican and Democrat, North and South — feels like we are constantly at each other's throats. We don't trust each other. We no longer see ourselves in our neighbor. And this is not some intellectual debate — people are dying. Our streets are burning. Inequality is soaring. It feels like things are about to break wide open. And it used to be — even if we didn't agree on what to do in our communities, we could at least unite in fighting common enemies. Everybody's okay with beating up Hydra. Even that's not so simple anymore. The good guys — S.H.I.E.L.D. and the N.S.A. — are getting caught doing things we never dreamt the bad guys would do, even in our worst nightmares. But the even bigger, scarier problem for me? In all these struggles, all these debates, and all these things tearing us apart — I have a side. That's right. I have opinions. Strongly held beliefs, even. And here's the thing — the more I saw the people I believed I was standing up for being walked on — the more I heard a noise machine spouting intolerance and fear, drowning common sense out — the more I wondered — shouldn't Captain America be more than just a symbol? Steve always tried to stay above the fray, and I respected him for it. He took a stand when he had to, but as far as politics went — he played it close to the vest. But if I really believed I could make a difference — if I really believed I could change some minds, do some good — then wasn't I obligated to try?"
— Sam Wilson, Captain America

Prior to Secret Wars (2015), Steve Rogers, the original Captain America, had the Super Soldier Serum drained from his body and he reverted to his original age. Due to this, he handed over his shield and the title of "Captain America" to his best friend and long-term fighting partner Sam Wilson, who became the new Captain America. They fought against Hydra and the Red Skull until Secret Wars and the All-New, All-Different Marvel happened. Then the writer became Nick Spencer (Morning Glories, Superior Foes of Spider-Man, Astonishing Ant-Man), who decided that since the character was Captain America, then it just made sense for the book to have more political themes.

And then, after seven issues, Avengers Standoff happened and Steve Rogers was restored to youth, super soldier serum intact. In the wake of Standoff, Steve and Sam decide that it's okay if there are two Captain Americas, even if Sam finds himself compromising on his ideals somewhat, while Steve moved to his own book Captain America: Steve Rogers.

While Ed Brubaker's run focused on espionage and Rick Remender's run had a weird science-bent, Nick Spencer's run has been heavily focused on political themes, with supervillains espousing opinions that seem to come straight from right-wing, conservative politicians. This was criticized heavily by right-wing, conservative politicians, which actually made the book more popular.