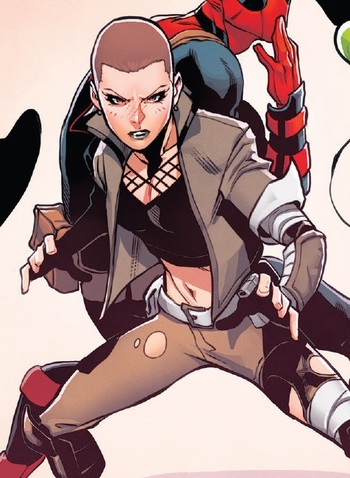 Introduced as a telepathic precog native of the mutant nation Genosha under Emma Frost's tutelage, Negasonic was more or less created just to die for plot reasons — she foresaw a Sentinel attack on Genosha that would ultimately kill millions of people, herself included.

She later showed up, apparently alive, as part of a new Hellfire Club, but this was later revealed to be a projected image of herself by Emma. While she was ultimately revived for real during the Necrosha event, she'd ultimately meet her demise yet again...

... until the Marvel NOW! (2016) era, when she was —once again— seen alive under unknown circumstances, now considered a member of Deadpool's Mercs For Money and displaying an expanded skillset than previously established. While merely a telepath with precognitive abilities before, she somehow gained the power to warp reality, travel through time, and manipulate particle energy.

The character's sudden re-emergence in the comics (as well as her new appearance and powers) can be traced back to the 2016 Deadpool film, where she appears as a major supporting character. Portrayed there by Brianna Hildebrand. This version of the character was very popular among audiences, leading to her return in 2018's Deadpool 2.

Negasonic Teenage Warhead has appeared in: