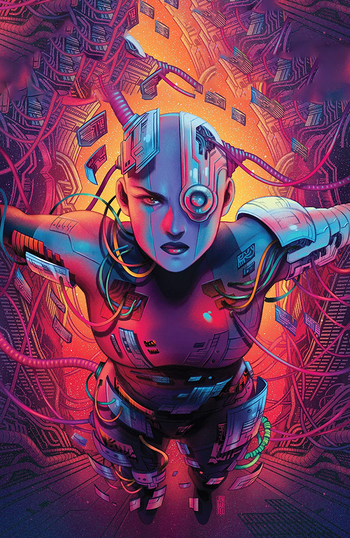 Nebula is a Marvel Comics character created by Roger Stern and John Buscema, first appearing in The Avengers #257 (dated July 1985).

Introduced as an Avengers villain, Nebula was a space pirate later revealed to be the granddaughter of Thanos, the Mad Titan. That was generally the extent of her characterization for a while, occasionally popping up as a minor antagonist in the cosmic side of the Marvel Universe.

She received major emphasis, however, during the original Infinity Gauntlet storyline in 1991. Nebula had a major role in helping the heroes take down Thanos, briefly even wielding the Gauntlet for herself. Following her arrest on (and escape from) Titan, Nebula was turned into the cyborg that she later become infamous for.

Outside of minor role in the 2006 Annihilation event, Nebula mostly remained in the background figure in the cosmic Marvel Universe in the following year, but her appearances in the Marvel Cinematic Universe (as portrayed by Karen Gillan) have seen a renewed interest in the character that's spread back into the comics, with her first solo series hitting in February 2020.

Nebula has appeared in: