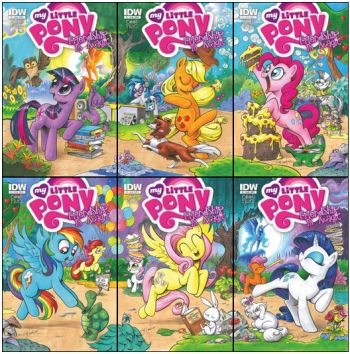 Six of the twenty unique covers for issue #1.
A My Little Pony comic book series based on the cartoon show of the same name. Published by IDW, with a rotating creative team, the series was first announced at the 2012 San Diego Comic-Con, with the first issue released on November 28, 2012.
Advertisement:

It was announced at the 2019 New York Comic Con

that the comic, starting with issue 89, will continue where the show left off in its own self-contained "Season 10".

After running for nine years, the comic book series concluded with issue #102.

This page also covers the Annual comics and one-shot specials. Most of these focus on either the Equestria Girls spin-off franchise or an Alternate Universe like the Power Ponies.

. Not an early April's Fool Joke nor an unofficial fancomic or even a Robot Chicken sketch. The worlds of Transformers and My Little Pony collide in a four-part monthly crossover. (Originally planned for May 2020; suspended due to Diamond shutdown and released on August 5, 2020.) Now returning with a new sequel