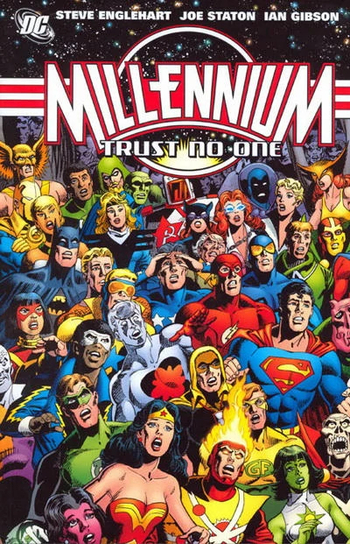 Millennium was a DC Comics crossover miniseries published as a weekly in the year 1987, though it was cover dated 1988... twelve years before the actual millennium change. The basic concept was that the Guardians Of The Universe chose ten humans to father the next race that will take over their duties, and they ask Earth's heroes to protect them from the Manhunters, a race of androids with a grudge against the Guardians. Things get more complicated when it turns out that the Manhunters have infiltrated the personal lives of all of the heroes.

Often considered among the worst of DC's crossovers, due to a variety of factors, but mainly because of a confusing number of tie-ins (56 issues!), blatant and inexplicable retcons, and a group of Chosen Ones that were largely unlikable ethnic stereotypes. Its Spin-Off, The New Guardians, didn't get much better, but at least featured Snowflame, a villain who got his powers from cocaine use, and The Hemo-Goblin, a vampire who gave people AIDS when he bit them.

This comic is not be confused with the various other works named Millennium.