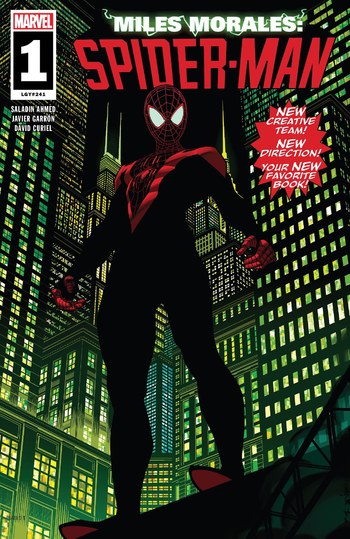 Hey, watch your step, you may fall down from there!note Cover by Brian Stelfreeze
Advertisement:

Miles Morales: Spider-Man is a comic book starring Miles Morales. It was released in 2018, by Saladin Ahmed and Javier Garron. Ahmed and Garron are also the first creative team to work on a Miles Morales comic after the character's creators, Brian Michael Bendis and Sara Pichelli.

While Bendis and Pichelli's run were higher-stakes, with considerable Morales-Davis family drama and Miles looking for his place in the superhero community of two different worlds, Ahmed and Garron's run aims to be more down to earth. More focus is put on Miles' school and personal life, with the book's narration captions having an in-universe explanation that Miles is keeping a journal for a creative writing class.

The book also expands Miles' supporting cast and Rogues Gallery, introducing Tiana Toomes / Starling, an up-and-coming Anti Heroine that Miles has mixed emotions about, Vice Principal Lyle Dutcher, a blowhard who respects Spider-Man as the embodiment of the values of tradition and responsibility but cannot stand that menace Miles Morales, and even the announcement that Rio Morales is pregnant with a second child. New villains include Snatcher, a man with Mind Control abilities that he uses to kidnap kids and sell them as minions to various criminals, the Assessor (and, by extension, his teleporting lackey Asset Quantum), a Mad Scientist interested in the limits of Miles' spider powers, and Ultimatum, a close personal friend of Mayor Wilson Fisk with some connection to another time and place that Miles can't quite identify.

Also, this is the book that established Miles' middle name is "Gonzalo".

Not to be confused with Spider-Man: Miles Morales, the 2020 PlayStation 4 and PlayStation 5 game starring Miles.