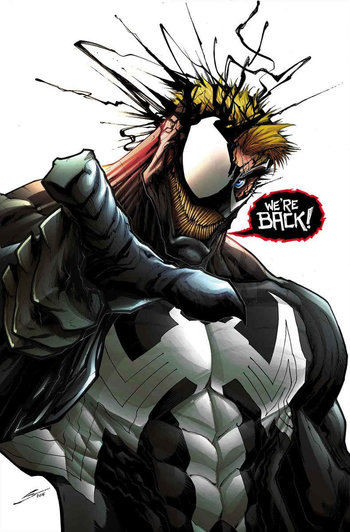 Back In Black
Advertisement:

Venom was a 2016 - 2018 comic written by Mike Costa as part of Marvel NOW! (2016) and Marvel Legacy, with artwork primarily by Gerardo Sandoval and Mark Bagley. Picking up where Venom: Space Knight left off, it saw the Venom symbiote being separated from Flash Thompson and ending up in the hands of the cruel former army ranger Lee Price before returning to Eddie Brock, struggling to overcome its worsening corruption with the help of Alchemax.

It was followed by Donny Cates' Venom, though the miniseries Venom: First Host served as an epilogue.