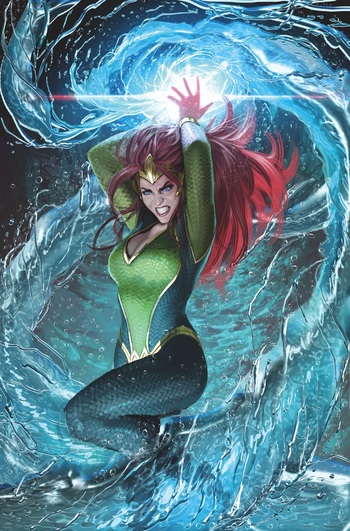 For most of her existence in The DCU, Mera's backstory was only alluded to vaguely, and it wasn't until 2010's Brightest Day that her origin was explored. Hailing from Xebel, an extradimensional penal colony for banished Atlantean people, Mera was sent to Atlantis (under an assumed alias) to kill Aquaman, but couldn't follow through with the plan because she instead fell in love with him.

Mera would eventually marry Arthur and become the Queen of Atlantis, which is perhaps the best-known aspect of her character, but she's notable on her own terms as well. Whereas he possesses telepathic control of aquatic life, Mera's skillset involves hydrokinesis and manipulation of hard water.

In 2018, her character saw some notable developments, which include temporarily joining the Justice League, becoming Queen of Atlantis, and starring in her own solo series, Mera: Queen of Atlantis. She also starred in her own graphic novel, Mera: Tidebreaker, released as part of the DC Ink Young Adult line in 2019.

As a major supporting character of the Aquaman franchise, Mera has appeared often in other media. Most notably, she features in the DC Extended Universe films, portrayed by Amber Heard.