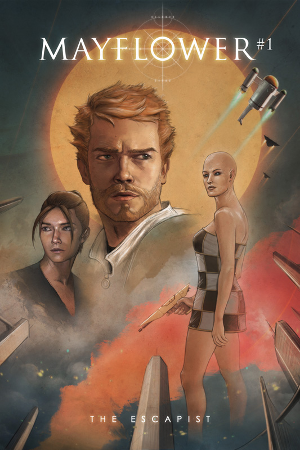 "The City has consumed this world."

From the author of the Halo Fan Webcomics Halo: A Fistful of Arrows and A Sangheili's War Is Never Over comes a new tale in an original universe...

In a future where Earth and the planets of the solar system are ruled by a Mega-Corp called the Commonwealth, a scientist named Robert Fergal is traveling to the headquarters of the Earth Science Guild when he witnesses a terrorist attack on their spacescraper. Mistaken for the perpetrator, Fergal is attacked by the ESG's security and crashes in a nearby nature preserve. While fleeing for his life, Fergal is found by a rogue security chief codenamed Silence, who is rescuing him so he can aid her underground group.

That group, which calls itself the Mayflower Project, feels Earth and the solar system has become a constrictive system, and so want to give people a chance to escape to a new, untarnished place. They deny having anything to do with the bombing, which may be at the hands of a third player who has destructive plans for Fergal and the Commonwealth...

As of 2015 there are two issues, both of which can be read at Mayflower.com