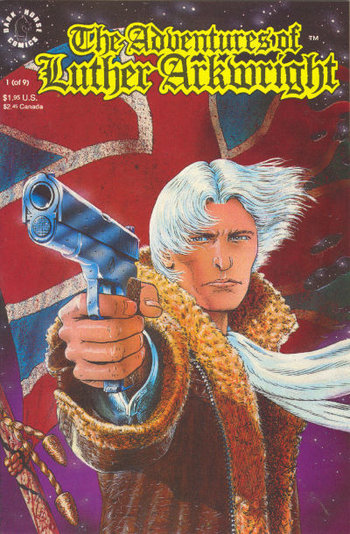 Luther Arkwright is the creation of Bryan Talbot. He serves as the main character or an important secondary character in the following of Talbot's works:

The main story arc can be found in The Adventures of Luther Arkwright and Heart of Empire.

Despite not reaching the popular acclaim of Maus, Watchmen, or The League of Extraordinary Gentlemen, The Adventures of Luther Arkwright had a huge influence on the development of the graphic novel. It shows in the first volume of Heart of Empire, which contains fan mail from Michael Moorcock, Alan Moore, Neil Gaiman, and Garth Ennis.

Other strands of the multiverse

Alternative Title(s): Heart Of Empire, The Adventures Of Luther Arkwright