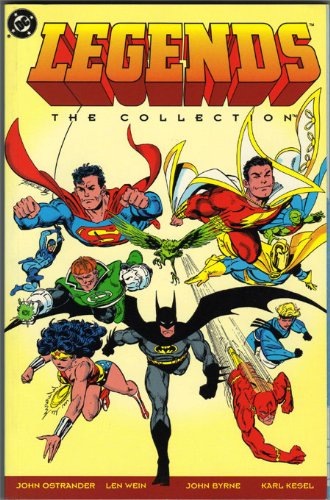 Legends is a six-issue mini-series that was published by DC Comics in 1986, created by John Ostrander, Len Wein, John Byrne, and Karl Kesel. In the story, Darkseid attempts to destroy the legend of superheroes by having his underling Glorious Godfrey pose as American sociopolitical pundit G. Gordon Godfrey to cast aspersions on superheroes in the minds of the general public. This results in violent rioting and the President of the United States calling on a ban on superhero activity until G. Gordon Godfrey's real purpose ends up being exposed when a Parademon swarm attack is unleashed on Washington, DC.

This series was most notable for launching the semi-humorous Justice League International and the perennially popular supervillains-doing-espionage title Suicide Squad with Amanda Waller debuting as their leader, as well as starting the career of the third Flash, Wally West. It also marked the Post-Crisis debuts of Wonder Woman (after she was rebooted from scratch by George Perez and Greg Potter) and Captain Marvel, as well as establishing the Post-Crisis Status Quo in DC's books at the time (prior to this, most of DC's books out at the time were still set in the pre-Crisis continuity, but officially changed to the new timeline after the mini).