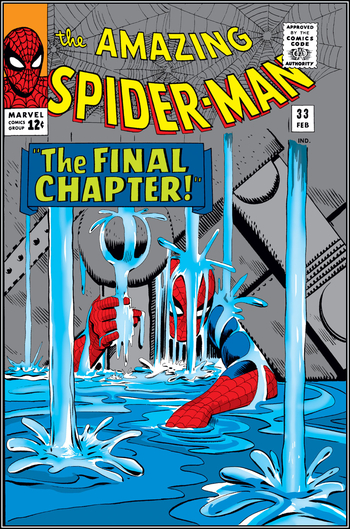 The first of many Final Chapters, but still the best.note Amazing Spider-Man Vol.1 Issue 33, Cover by Steve Ditko
"That Peter Parker certainly is a nice boy! He's sincere—well-mannered—and devoted to his Aunt! Too bad there aren't many more young men like that! Too bad someone like him can't be an idol for teenagers to imitate instead of some mysterious, unknown thrill-seeker like—Spider-Man!"
— Issue #33, written by Stan Lee
Advertisement:

The ever impressive, the long contained, often imitated, but never duplicated original run on Spider-Man by its first creative team — Stan Lee and Steve Ditko. Beginning in 1962 and ending in 1966 when Ditko left the title.

Debuting in Amazing Fantasy #15 (August 10, 1962), the team worked on the major flagship title, The Amazing Spider-Man from Issues 1-38 and Two Annuals. Like all of Lee's works this was done in the Marvel Method whereby the artist (in this case Ditko) actually created the plots and stories from Lee's suggestions. Unlike Lee's collaboration with Jack Kirby however, Ditko actually got a credit for plotting near his final issues. Unlike other runs by later writers that are grouped under their names (like Dan Slott and Nick Spencer), it's generally acknowledged that this run was a true collaboration between Lee and Ditko, with the former's great dialogue matching Ditko's intricate plotting and use of paneling, and his gifted eye for action, layout, and movement.

This run shows Peter Parker and Spider-Man in the process of becoming Peter Parker and Spider-Man as we know them today. Peter lived with his Uncle Ben and Aunt May until he got bit by a radioactive spider making him into the first teenage superhero. A Tragic Mistake on Peter's part leads to his Uncle's death making him realize that he must his use his powers responsibly. Unfortunately, as Amazing Spider-Man 1 shows he's dead broke, still in high school, is now the male provider who must take after his old aunt, and most people still see Spider-Man as a clown. So he decides to find a way to make things right, working a job at the Daily Bugle selling pictures to J. Jonah Jameson, dating the secretary Betty Brant, while still trying to finish high school. Unfortunately, Peter isn't the only costumed freak with powers and gizmos. Soon a new crop of supervillains arrive, who will become enduring staples of his rogues gallery: the Chameleon, the Vulture, Doctor Octopus, the Sandman, the Lizard, Electro, Mysterio, the Green Goblin, Kraven the Hunter, the Scorpion, and the Spider Slayers among others.

Despite coming so early in the character's history, this is still the main and crucial foundation for the entire franchise. There aren't many new additions to the Rogues Gallery beyond what's introduced in these opening issues, it has most of the supporting cast featured and/or mentioned. It's also been revisited by later writers such as John Byrne's Spider-Man: Chapter One a streamlined Setting Update that mashed together Issue 1-20 before being cancelled. Kurt Busiek's Untold Tales of Spider-Man revisits this era by inserting many stories and plots of supporting characters in the style of this period. The Spectacular Spider-Man is based on this run of the Spider-Man comics and adapts many elements and plots from it.

The Comics Journal's 210th issue published in February 1999 listed this entire series and run in its Top 100 Comics List, where it ranked as one of few superhero titles chosen (alongside Jack Kirby and Stan Lee's Fantastic Four, Jack Cole's Plastic Man, Alan Moore and Dave Gibbons' Watchmen)note And depending on how it's classified at times, Will Eisner's The Spirit and Chester Gould's Dick Tracy.

In 2018, both of Spider-Man's original co-creators passed away within six months of each other in the same year.

Tropes in this run include: