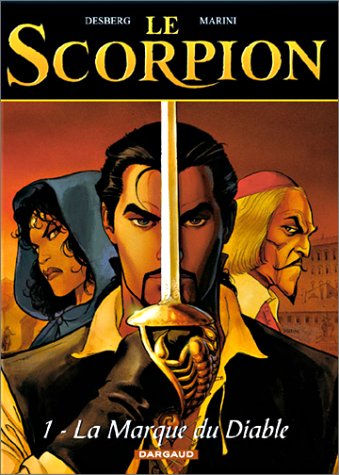 Le Scorpion (2000-) is a Franco-Belgian comics series written by Stephen Desberg, illustrated by Enrico Marini and published by Dargaud in French and Cinebook in English as The Scorpion.

The story takes place in Rome during the second half of the eighteenth century. Cardinal Trebaldi decides to reinstate the power of the nine families, based on papacy. Armando Catalano, also known as The Scorpion, is a holy relics dealer. He is the son of a heretic who was burnt alive for misdirecting a priest from the church and Christian beliefs. Armando, the bearer of the “mark of the devil”, a birthmark in the shape of a scorpion, will challenge the cardinal’s authority. The cardinal, who seems to be filled with hatred for The Scorpion, sends a young gypsy specialized in poisons to kill him.

The adventures of the Scorpion lead him to the treasure of the Templars and to discover an interpretation of what might have happened to it.