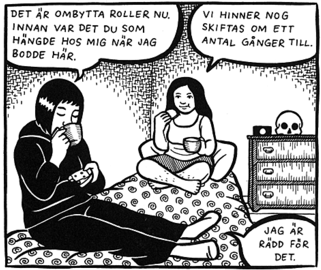 Johanna and Helena are two sisters who are at the center of a series of Swedish graphic novels by Patrick Rochling and Li Österberg. Most of the chapters are about them or at least one of them, but the third album focuses on Johanna's former girlfriend Klara as she's becoming a priest. Other important characters include Anna (Klara's new girlfriend), Johanna's and Helena's Mother, and their father who was never really a part of their lives but becomes a main character after his death.

The father's role is very creepy: He never contacted his children, but after his death it turns out that he stalked them throughout their childhood, youth and early adulthood until his death. He took lots and lots of photos of them, and these photos becomes the narrative portal through which the story starts jumping back and forth in time.

(The title translations are far from perfect, and the titles are not fully translatable since they rely heavily on subtext.)

The stories rely heavily on psychological drama: The interesting part is not the lives the characters live, but how they relate to it - or rather how they fail to relate to it. Over the course of the albums, the stories have grown increasingly dark - revolving about how people who have grown up together can still be strangers to each other and even to themselves.