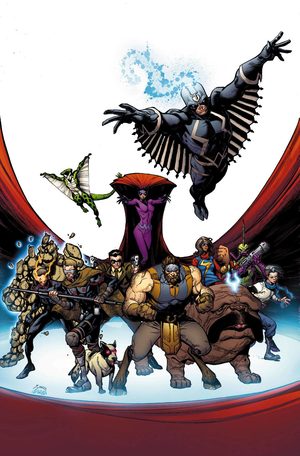 The All-New, All-Different Inhumans. note Clockwise: Black Bolt, Iso, Triton, Lockjaw, Ms. Marvel, Gorgon, Nur, Reader, Inferno, Flint, Naja, Medusa. Not pictured: Karnak, Grid, Crystal.
"I am the face of the Inhuman nation. Nuhumans across the globe look to me as an example of how to live in this changed world. But they also look to you, Inferno, and Iso, and the others. You are my hope for the future. You represent the truth. Being Inhuman can be... wonderful."
— Queen Medusa
Advertisement:

Among other things, Marvel's 2013 event Infinity (and its spin-off story, Inhumanity) were notable for impacting the Marvel Universe in one major way—namely, introducing Terrigen Mist to the Earthbound Marvel Universe, awakening latent Inhumans worldwide.

In its wake, Inhumanity writer Matt Fraction was tapped to follow-up with Inhuman, a new ongoing title dealing with the ramifications of Attilian —the mobile Inhuman city— relocating to the Hudson River in New York City. Citing creative differences, Fraction left the title after one only one issue, leaving the fate of the burgeoning new Inhumans line in question...

The solution? Enter Charles Soule, the comic industry's infamously prolific pinch-hitter. He wrote the entire line, starting with Inhuman #2, with James Asmus assisting on All-New Inhumans. Effectively similar to how Chris Claremont managed the X-Men line during the The Bronze Age of Comic Books, Soule's run on the Inhumans has stretched over multiple titles:

Charles Soule's run on the Inhumans ended after Inhumans vs. X-Men, and the Inhumans would instead get some new ongoings as part of the Resurr Xion relaunch. Soule would return to the X-Men line, and the various new Inhumans comics woulds stand on their own with different writers.

For general character tropes involving these ones featured here, refer to the Inhumans character page.