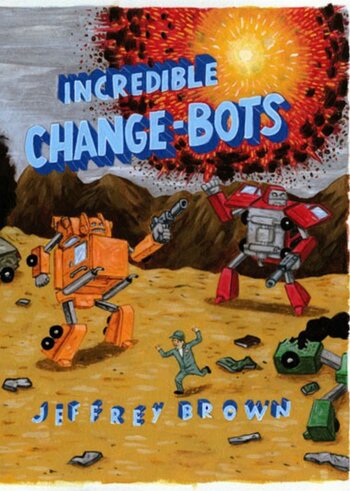 A 2007 graphic novel written by Jeffrey Brown, published by Top Shelf Publications. A sequel Incredible Change-bots Two, was released in 2011, which was followed by a 2014 "rarities" collection, Incredible Change-Bots Two Point Something Something, with comics first published in the ICB fan club newsletter and other material.

After depleting their planet of energy, two warring factions of transforming robots, one led by a robot who turns into a truck with a trailer, the other led by one who turns into a pistol, take their war to Earth and wind up involving humans into their war. Sound familiar?

Half love letter, half parody of 1980s Merchandise-Driven Giant Robot franchises (primarily The Transformers, naturally). Expect extensive Lampshade Hanging of... pretty much everything from the source material.