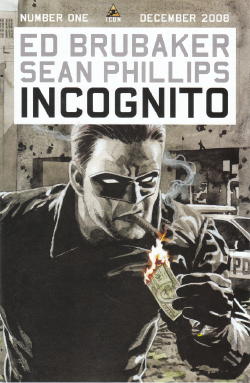 Incognito is a comic series by Ed Brubaker. A sequel miniseries, Incognito: Bad Influences, was released around late 2010/early 2011.

In a World... where superheroes are based on the pulps rather than The Golden Age of Comic Books, Zack Andersen was born on the wrong side of the law. Eventually turning state's evidence, he sells out his villainous allies and goes into witness protection. However, he's still, well, a super-criminal, so some government scientists give him a medication which he must take to nullify his superpowers. Zack gets a job in an office, and that's the end of it.

Zack is bored out of his law-breaking mind. He turns to drugs to numb the pain, only to discover that they negate the effect of the medication. Zack can't go back to being a criminal, since his old pals will kill him if they find out he's still alive. Similarly, he can't stay a normal person, or he'll go all crazy-like. So he grabs a Domino Mask, puts on a leather jacket, and becomes a super-vigilante.

If you think that's screwed up, well - so are the rest of the heroes.

Meanwhile, his criminal fraternity realizes that someone with his powers is active. And then things get interesting...

This comicbook series provides examples of:

With the following specific to Bad Influences: