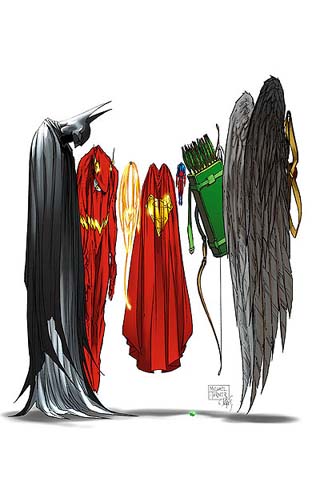 "Anyone who puts on a costume paints a bulls-eye on his family's chest."
— Ralph Dibny, The Elongated Man
Advertisement:

Crisis on Infinite Earths and Zero Hour: Crisis in Time!—these two series were massive crossovers and usually resulted in some form of Retcon for at least one character involved. Crisis was the big one, merging Earth-2 and Earth-1 together, bringing us into the newly established Post-Crisis era. Zero Hour… made Hal Jordan, the most popular Green Lantern, into a supervillain and mucked up continuity. What Identity Crisis brought was similar but definitely NOT what readers were expecting.

As the story begins, Sue Dibny, the wife of the superhero the Elongated Man, is mysteriously murdered with her body set on fire while her husband is on stakeout. The Justice League investigates the scene of the murder, the Dibny household, and are bewildered by the lack of evidence to be found. While sending out most of the League and the Teen Titans to look for fire- and/or teleport-based villains, the core members of the League (minus Superman and Batman) secretly turn their attention to small-time villain Dr. Light (the male one, not to be confused with the female superhero who debuted in the Crisis). But before they can confront him, Wally West and Kyle Rayner overhear the League's plans and demand to know why they are confronting Light.

They reveal that years ago, Dr. Light managed to teleport to the League's satellite, discovered Sue alone, and proceeded to rape her. Light is stopped quickly, but he lustfully swears he will do it again as soon as he's released and in the meantime will tell all the other supervillains how he raped Elongated Man's wife. The League then decides to wipe his memory and change his personality so the threat is defused. In the present, Dr. Light discovers he's the League's target and hires Deathstroke, but in the tail end of the fight, Light regains his memories and escapes, revealing the truth in an optic construct only the Flash is fast enough to see. The Flash sees that Batman was there the night Sue was raped, but Zatanna mindwiped him as well when he tried to stop Dr. Light's mindwipe.

Sue's autopsied, and it is revealed she didn't actually burn to death. Meanwhile, Jean Loring (ex-wife of Ray Palmer, aka The Atom) is nearly lynched by an unknown assailant, and Lois Lane is threatened by someone who knows she married Superman. Tim Drake goes through a parental struggle with his father, who knows Tim is Robin and wishes for his safety. Captain Boomerang reconnects with his bastard son and discovers he is a speedster. While the divorced Atom and Jean reconnect, Jack Drake, Tim's father, is sent a gun with a warning and attacked. Jack uses the gun to kill his attacker, Captain Boomerang, but is killed by one of Boomerang's weapons. Robin and Boomerang Jr. both lose their fathers, and the mystery is apparently solved… until the autopsy of Sue reveals tiny footprints in her brain, which really killed her. Batman learns of this and deduces also that the Atom didn't kill Sue, and we learn that Jean discovered one of Atom's spare suits. In an attempt to reconnect with Ray (her ex-husband), Jean tried to organize an illusion of a threat to superhero families, but accidentally killed Sue and hired the wrong assassin for Jack Drake. Ray commits Jean to Arkham Asylum, shrinks to a microscopic size, and disappears completely. In the end, the League is shaken up, it is implied by Green Arrow that Batman might know he was mind-wiped; Dr. Light regains his old personality, Boomerang's son becomes the new Captain Boomerang, and Ralph Dibny is now a widower.

So in the end, where the Crisis and Zero Hour were large crossovers that involved retconning and large gigantic battles, Identity Crisis was much more low-key, being a quieter crossover that was instead a murder mystery. However, that is why fans would point to this book if a new reader ever asked for a good starting point to get into The DCU. The retcons were smaller, but a little obvious. Especially with the Justice League.

Identity Crisis was directly followed by Infinite Crisis, which followed the typical format much more closely. Over a decade later, the story had a Spiritual Successor in Heroes in Crisis, another "crisis" that tackles a smaller scale threat concerning heroes' personal lives and privacy.

Written by Brad Meltzer with art by Rags Morales.

Tropes used in or associated with Identity Crisis: