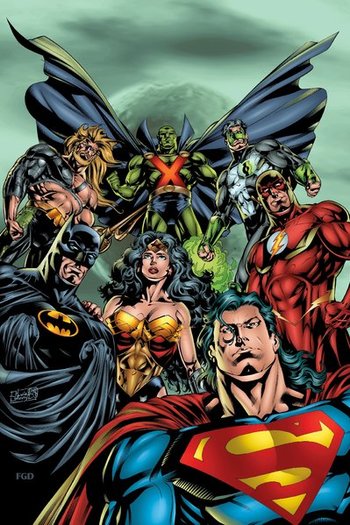 After several years of roster changes, tone shifts, a brief, successful foray into comedy and a hard turn into the Darker and Edgier 90s that left it in the middle of a massive Dork Age, DC decided to clear house and return to a “back-to-basics” approach to the Justice League under the pen of Grant Morrison. Following off of a three-issue miniseries written by Mark Waid and Fabian Nicieza titled Justice League: A Midsummer’s Nightmare, Morrison and artist Howard Porter relaunched the book under the title JLA, establishing a new roster consisting of the iconic seven founders of the team or their successors: Superman, Batman, Wonder Woman, The Flash (Wally West), Green Lantern (Kyle Rayner), Aquaman, and Martian Manhunter.

A critical and commercial success, JLA established the League as a force united to face threats on an Earth-shattering level and subsequently revamped several classic villains such as Starro, the Crime Syndicate, the Injustice Gang, Darkseid, and more to raise the stakes in every issue. Morrison stayed with the book until issue #41 (aside from a few fill-in issues by Waid and other writers), bringing their Myth Arc to an end with the World War III storyline that saw every human being on earth imbued with superpowers and inducted into the League to combat an Old God weapon. Other writers would take over and the series would run for over a hundred issues, but the Justice League would continue to be defined by its core “magnificent seven” roster, potentially universe-ending threats and keeping its status as DC’s flagship title.

This series served as the primary inspiration for the animated Justice League, which took a similar approach to restructuring the League for a new generation after the team had been linked for decades to the Lighter and Softer Superfriends.

Storylines in this run that have their own pages: