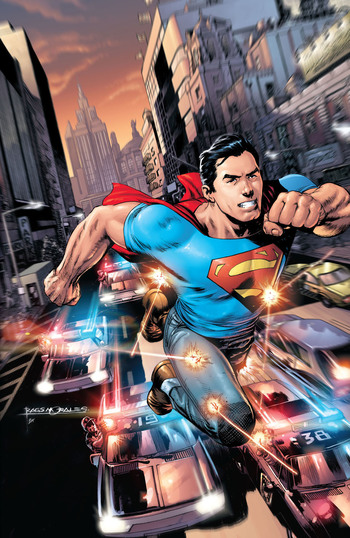 The Man of Steel brought back to his roots.
"Rats. Rats with money. And rats with guns. I'm your worst nightmare."
— Superman
Advertisement:

When Action Comics was rebooted for the New 52 in 2011, All-Star Superman writer Grant Morrison took the reins for the first 19 issues (#1-18 and the prequel issue #0). Morrison's run was set in the early days of Superman's super-career, and established the character's origin story in the New 52 continuity.

The run consisted of three main story arcs, with a few single-issue stories scattered among them. In the first story arc, Superman defeats his first major alien menace and learns about his Kryptonian heritage. In the second story arc, he faces the metahuman Captain Comet and angsts about the potential danger he's putting his friends in just by associating with them. In the one-shot stories, a group of supervillains travel from the future to kill Superman while he's relatively young and defenseless, and a group of heroes (including the Superman from the New 52's present day) travel back to stop them; a superpowered menace moves between alternate universes battling the Superman in each; a boy's life is changed when he "borrows" Superman's cape; and, in a Halloween issue, Superman is troubled by ghosts that are actually the prisoners of Krypton's Phantom Zone.

The final story arc of the run draws together elements from all the preceding stories into a complicated story about Superman's first encounter with one of his classic adversaries which is simultaneously that adversary's last encounter with Superman and a close-run battle against a new, more dangerous enemy with a grudge against them both.

Starting from 2011, the series was Superman's new origin story. However, as of Superman Reborn, it was replaced with Superman: Secret Origin, though Doomsday Clock implies some parts of it have either remained in canon or have returned in a minor sort of Cosmic Retcon.