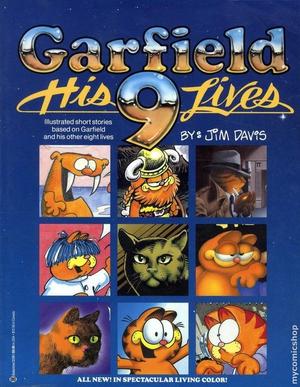 The cover for the original Graphic Novel
Cuz I'm a blues cat
And I'm broke from paying my dues
Cuz when you got nine lives
You got nine ways to lose
— Theme song of the Animated Adaptation
Advertisement:

Garfield: His 9 Lives is a Graphic Novel (Graphic Short Story Anthology if you want to get picky) based on the Newspaper Comic Garfield, written and illustrated by Jim Davis and Paws, Inc. The central concept of the book is that, since cats have nine lives, Garfield must have a bunch of past lives that made him the lazy, sarcastic cat that we know and love (or not) today, and each of those lives gets its own story.

Goes in some very different directions from most Garfield media. While some of the stories wouldn't be out of place appearing the regular newspaper strip, others go in more surreal or dramatic directions; there's even a genuine Horror story. Some of the stories also go a bit more adult than what we usually get from Garfield; nothing that would stop it from getting a PG rating, but there are some mild swear words present, a couple references to alcohol, a few deaths, and some obvious hints that at least one of Garfield's past lives actually had sex.

The stories present in the book are: 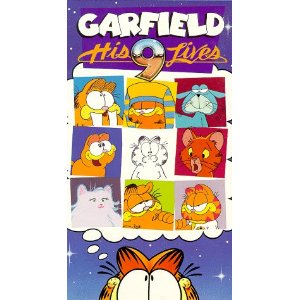 Was also adapted into an Animated Television Special, which removed some of the stories and added a few new ones. "Babes and Bullets" was also made as a separate special. The new lives ("In The Beginning ...", "Cave Cat", "Lab Animal", "The Garden", "Garfield" and "Space Cat" remain, though some have been re-ordered) of the Animated Anthology are:

Furthermore, BOOM! Studios has made a four issue remake of the series and has taken their own interpretations. While "Cave Cat," "King Cat," "Sam Spayed," "Lab Cat," and "Space Cat," (now named Ace Nova), remain as part of Garfield's lives, we are introduced to some new ones:

May be distantly related to The Nine Lives of Fritz the Cat. Between this, Garfield's Judgement Day and the licensed parody Garfield Minus Garfield, it seems, Jim Davis is a pretty cool guy.

Aside from the tropes carried over from the book, the special provides examples of: