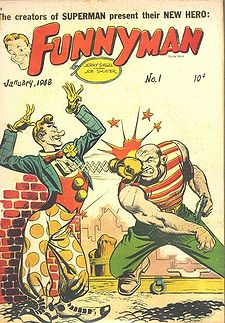 So basically, Funnyman's modus operandi consisted of annoying his enemies until they laid down on the floor and died.
— Cracked
Advertisement:

Meet the Oswald the Lucky Rabbit of Golden Age comics.

Funnyman is the star of a self-titled comics series created in 1948 by Jerry Siegel and Joe Shuster, famous as the fathers of that other guy. The character was little more than an attempt to make lightning strike twice after DC Comics had bought out their iconic creation for the measly sum of $130 — needless to say, it didn't work, and Funnyman has passed into obscurity.

Funnyman himself is Larry Davis, a comedian talked into performing a superhero-themed publicity stunt by his manager, June Farrell. As it happens, Larry accidentally foils a real robbery — and finds that fighting crime is his true calling. He goes on to perform genuine heroic deeds with the help of June and Sergeant Harrington, an officer who didn't view Funnyman in the highest regard. Alas, readers were not amused, and Funnyman hung up his novelty rubber nose after just six issues. They tried again with a Funnyman newspaper comic in October 1948...not only did Funnyman fail to find an audience there, but in July 1949 he was dropped from his own strip in favor of a new character named Reggie Van Twerp, a rich idiot whose butler continually had to save him from trouble. Funnyman ended in the fall of 1949, never having achieved a fraction of Superman's popularity.

Then again, as the second son of Superman's creators, the guy had some really big shoes to fill.

Has nothing to do with the similarly named 1994 film.