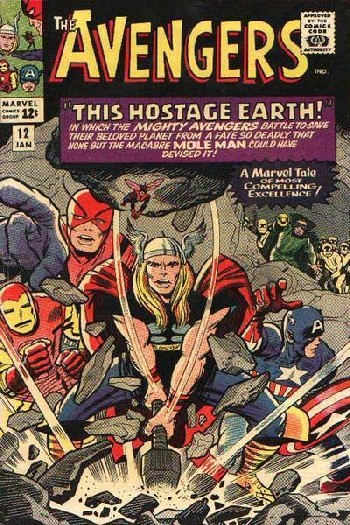 Captain America: "Wait a moment, team. I think that the Mole Man is in the other direction!"
The Avengers were created in 1963 by Stan Lee and Jack Kirby. Although there were changes from the very begining, the first team is usually considered the one from Avengers 1 to Avengers 16. Several classic villains were introduced by this time.
Advertisement:

It began with Loki, Thor's brother and archenemy, who was imprisoned on the Isle of Silence for his crimes. Searching for a pawn to get rid of Thor for him, he found the Hulk. Creating an illusion of dynamite on a train track, Loki tricked the Hulk into destroying the track, prompting a manhunt for him. Figuring that the Hulk needed help, Rick Jones and the Teen Brigade sent a distress call to the Fantastic Four, but it was redirected by Loki to the radio of Dr. Donald Blake, Thor's alter ego. The call was also inadvertently heard by Iron Man, Ant-Man and the Wasp. They all defeated Loki, and organized as a team. The Hulk left the following issue after realizing how much the others distrusted him, but the Avengers soon found a new member: Captain America, who was frozen in the arctic since WWII. Captain America's enemy, Baron Zemo, would create the Masters of Evil as the recurring rogues gallery of the Avengers.