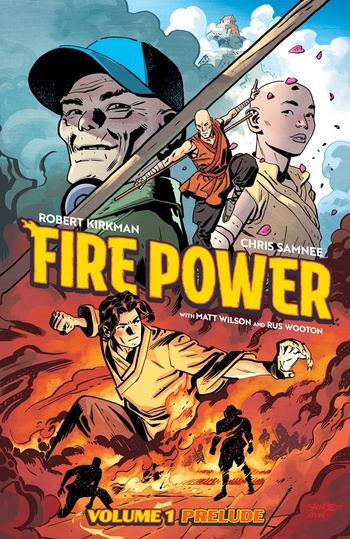 Fire Power is a monthly comic book series published by Image Comics, which began in July, 2020. It is written by Robert Kirkman of The Walking Dead fame, with art by Chris Samnee, best known for his run on Daredevil.
Advertisement:

15 years ago, Owen Johnson travelled to a secret Shaolin temple to learn about his birth parents. There, he learned of the Fire Power, the manipulation of heat practised by the temple's martial artists. Johnson learned to wield it himself, finding love, friendship and family there, along with the truth about his birth parents. He eventually became the first practitioner of Fire Power in decades to create a real fireball.

In the present day, Owen is an unassuming family man, content with his wife and two kids. What happened to Owen and why he left the temple isn't known, but his past begins catching up with him...

Fire Power was launched in two forms: A prelude OGN that features Owen's arrival at the Shaolin temple, and a free first issuenote Originally meant to release on Free Comic Book Day 2020, before that event was cancelled due to COVID-19 that depicts what he's up to now. The ongoing series started in August of 2020, with issue 1 being a reprint of the free first issue with a new cover and back matter, while issue 2 continues the story proper.

Not to be confused with Fire Force