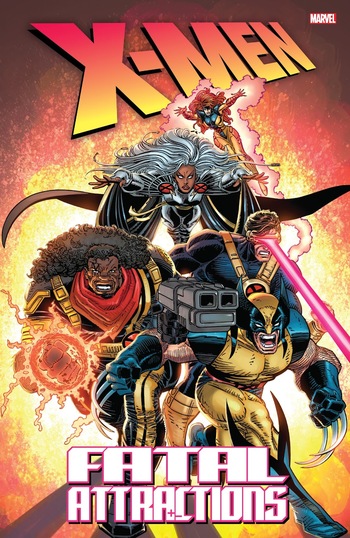 Fatal Attractions is the X-Men Bat Family Crossover released in 1993. It was set up as the Milestone Celebration for the franchise's 30th Anniversary series.

Magneto, thought dead after his Asteroid M spacebase fell to Earth, has returned, joined by a new team of Acolytes, backed by the mysterious mutant Exodus, and having taken residence in Avalon, formerly Cable's spacebase Greymalkin. Once more seeking to unite mutantkind as a group under his guidance, he comes to approach his old foes the X-Men during a troubling time. However, his actions resonate with one of the X-Men and when Magneto seeks to strike out on the Earth, the X-Men's counterattack would greatly change all of them forever.

The six-part series, that ran through X-Factor, X-Force, Uncanny X-Men, X-Men (vol 2), Wolverine and Excalibur effectively changed the landscape for the franchise for a good decade, between Colossus' Face–Heel Turn, Wolverine's loss of his adamantium, the constant flip-flopping of Magneto following this event and setting the stage for the sequel story Blood Ties and later on down the line Onslaught.

In 1994, Capcom (loosely) adapted the storyline into their game X-Men: Children of the Atom, which would go on to form the Marvel vs. Capcom series.

Has nothing to do with the Animal Planet documentary nor the almost similar thriller film.