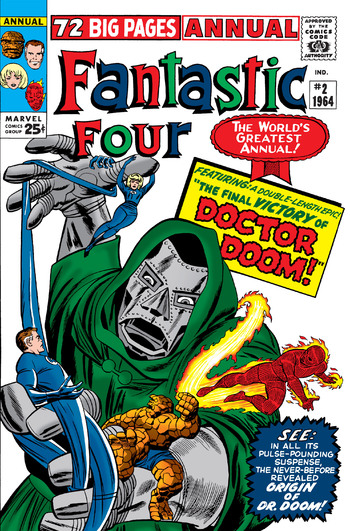 "You twisted yourself around my hand? RICHARDS!!!!"

From this moment on, there is no Victor Von Doom! He has banished... along with the handsome face he once possessed! But, in his place, there shall be another, wiser, stronger, more brilliant, more powerful than ever before!! From this moment on, I shall be known as Doctor Doom!

The Fantastic Four Annual #2 is a comic focused on Doctor Doom.

The first story, titled "Origin of Doctor Doom", is his Origin Story. His father was the healer of a gypsy caravan, persecuted for being unable to save the wife of a local baron. His son, Victor Von Doom grew to become an Insufferable Genius, and was invited to study at an American university. He damaged his face while conducting experiments, and was expelled. With his face disfigured, he created a body armor and a metal mask for himself.

The second story features the return of Doom in the present day, last seen hurtling off into space after an attempt to destroy the Fantastic Four. Rescued by the enigmatic time-traveller Rama-Tut, he returns to Earth, seeking his final victory against the Fantastic Four. As you may suspect, there's a catch...

Tropes for "Origin of Doctor Doom"

"We did not capture the gypsy after all! It is some kind of mechanical man!"

Tropes for "The Final victory of Dr. Doom!"