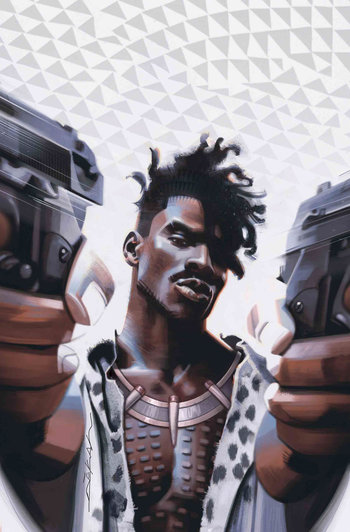 One of the Black Panther's greatest foes, Killmonger is known for his treacherous persona and ruthless battle tactics. The son of an exiled Wakandan, Killmonger grew up with a deep-seated hatred of his native land, vowing to exact his revenge on them for their treatment of his father.

He would eventually make good on his promise, terrorizing the nation of Wakanda on a number of occasions in his adult life, even stealing the crown for himself at one point. He's often seen collaborating with the Black Panther's other nemesis, Ulysses Klaw, despite hating him nearly as much as Wakanda's rulers, since the man was partly responsible for his father's exile in the first place.

Killmonger notably appears as the main antagonist of 2018's Black Panther film, portrayed there by Michael B. Jordan. This version of the character largely resembles his original counterpart, with the exception of his new blood relation to T'Challa as first cousins. Many have cited this portrayal of the character as being one of the best superhero movie villains since Heath Ledger's Joker in The Dark Knight a decade earlier.

Not to be confused with Killraven, another (similarly-named) Marvel character.