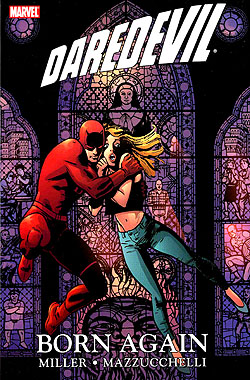 "Six hours . Spent sweating and straining, seeking the limits of his own inhuman strength. Seeking the place past the thought. There is no corpse. What is it about Murdock? He was a minor concern - - a promising talent to be observed and catalogued and even flattered- - and perhaps one day to be turned to the Kingpin’s way - - but he is more than this. Now he is much more than this. He always was. And I - - have shown him… that a man without hope…is a man without fear. "
— Wilson Fisk/The Kingpin’s monologue, the conclusion of Part Three: Pariah
Advertisement:

1986 was a big year for Frank Miller. In between the other stuff, he also happened to write this: an instant classic and swan-song to his hugely influential 1979-83 stint on the character. The story goes like this: Karen Page, the love of Matt Murdock's life, now a washed-up and coked-out adult film star, sells his secret identity for a fix. Said information, as good as gold, makes its way to no less than the Kingpin of Crime, Wilson Fisk. Who proceeds to "test" the information — by completely ruining Murdock's life.

Murdock loses his house, job, friends, and even sanity. But as Murdock, exhausted and enraged, fights the Kingpin — and survives, however destitute — Fisk notices something. Murdock won't quit. Kingpin finally has found the man he cannot break.

The story is considered one of the best of the era and one of the three eminent superhero deconstructions — among them Batman: The Dark Knight Returns and Watchmen — though less famous than they are (and notably the only one to be set in its publisher's main continuity rather than a standalone miniseries). Which is somewhat ironic in itself, given that of the three Born Again probably remains closest to the traditional superhero story, without going into Sociopathic Hero territory. More than the other two, Murdock is portrayed as a fundamentally decent guy with genuine heroic impulses, while still very much a human being, and the central story is an old fashioned battle between the hero and the villain. Notable for featuring perhaps the first time a superhero comic issue in which the hero is not once in his costume.

A live-action adaptation of Born Again —intended as a sequel to the 2003 Daredevil film— was in development at one point but never made, while a later pitch for a (separate) film adapting the story was rejected by 20th Century Fox in 2012. However, the third season of Daredevil (2015), released in 2018, would ultimately borrow several elements from the story. In 2022, however, it was announced that a revival of the 2015 series would be titled Daredevil Born Again.