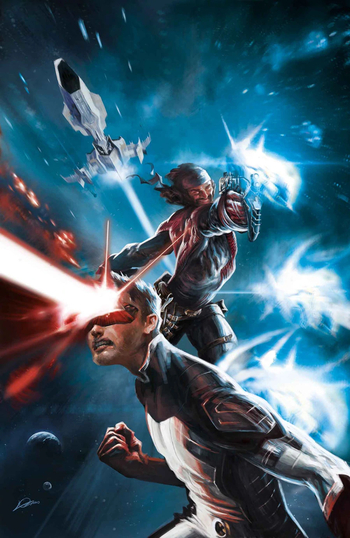 Cyclops is a series published by Marvel Comics, written by Greg Rucka with art Alexander Lozanoby. It debuted on May 2014.

The series focuses on the time-displaced Scott Summers, who was plucked out of his own time along with his friends by the present day Beast at the beginning of the All-New X-Men series. He is told that this was done in order to stop his modern-day self, who is described to him as essentially being the next Magneto, from starting Mutant rebellion. This Cyclops meets his modern-day self, and eventually sides with him after learning that all was not as it seemed. He eventually discovers that his father Corsair (Christopher Summers) is actually alive, and after a while, Scott leaves his team in order to spend time with his father and to have the childhood he never had.