Comic Book / Curse of the Worgen 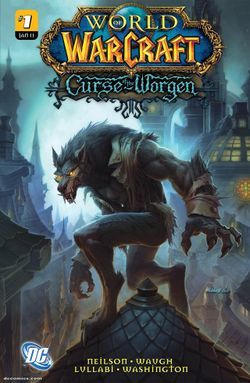 Curse of the Worgen is a five-part comic miniseries explaining the background and specifics of World of Warcraft's Worgen Curse. It was written by Micky Neilson and James Waugh, and drawn/colored by Ludo Lullabi and Tony Washington.

Curse of the Worgen primarily follows Halford Ramsey, a famous Gilnean detective in charge of investigating a rash of brutal murders known as the 'Starlight Slasher' murders. His searches lead him to discover the age-old legend of the Worgen Curse. The comic also touches in with characters from the in-game worgen starting zone as they deal with the beginnings of the zone's events.

Curse of the Worgen contains examples of: