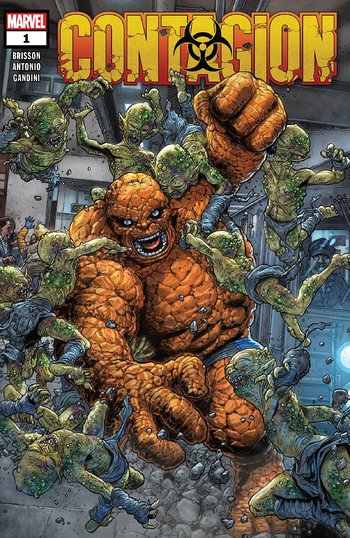 Ben Grimm is having a bad day.

I'm sorry for approaching you like this... but your entire world is about to be destroyed, Daniel-Kai.
— Sparrow

Something below the city of K'un-L'un has awoken. A week later, a member of the Yancy Street Gang finds Ben Grimm and asks for his help: something happened to their friend in the subway and they don't know what to do. When Ben ventures down into the tunnels, he finds more than he bargains for: the Yancy Street gang member, as well as dozens of Moloids, have been infected with some sort of fungus called "the Urchin."

When the Fantastic Four arrive to help Ben and put a stop to the infected Mole Man, another horrific facet of the Urchin is revealed: once it infects a superhuman, it will absorb their powers as well, and begin speaking in their voice. And then, suddenly, Reed, Sue, and Johnny are all infected, with only Ben's rocky skin saving him.

And as the leader of K'un-L'un wakes Danny Rand from his sleep, she tells him that his world is about to be destroyed.