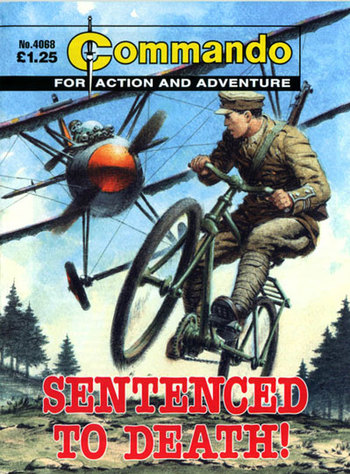 Commando For Action and Adventure, formerly known as Commando War Stories in Pictures, and colloquially known as Commando Comics, are a series of British comic books that primarily draw their themes and backdrops from the various incidents of the World Wars I and II, though there are a few modern settings. The comic, still in print today, was an Alternate Company Equivalent to the earlier Battle Picture Library and War Picture Library series, which have since been discontinued. The comic is noted for its distinctive 7 × 5½ inch, 68 page format that became a standard for these kinds of stories.

The general tone is more The Guns of Navarone than Saving Private Ryan; the horrors of war are still there, but they don't overpower the adventurous tone of the stories. Over the years, the "Boy's Own Adventures" attitude has been toned down a bit, but it's still a mostly optimistic view of war, viewing it more as a necessary evil than a fun time for the boys.