Commander Steel (also known as Captain Steel, Citizen Steel, Sergeant Steel, or Steel) is the name of three comic book superheroes appearing in publications by the American publisher DC Comics, all members of the same family. The first Steel appeared in Steel, The Indestructible Man #1 (1978), and was created by Gerry Conway and Don Heck. His stories were set in World War II. The two later characters called Steel are his grandsons. For the unrelated DC character see Steel.

The first Steel debuted in the series Steel, The Indestructible Man in the 1970s (though it was set in World War II.) Henry "Hank" Heywood was an American soldier who, after being badly hurt, was remade as a cyborg with "indestructible" skin. Still having a human appearance, he developed a secret identity as a superhero wearing a costume based on the American flag. He first appeared in Steel, The Indestructible Man #1 (March, 1978), created by Gerry Conway and Don Heck.

The original Steel series only lasted 5 issues, ending in November, 1978. The cancellation was part of the so-called DC Implosion, the abrupt end to over 24 series. The character was not forgotten. He became a regular in the All-Star Squadron, a series devoted to Golden Age heroes. Using the alternative codename Commander Steel. In the "present" day, Hank turned very much alive in 1980s tales of the Justice League of America. He went on to become one of several heroes fighting against Eclipso, in a series spotlighting this villain. He was finally killed in Eclipso #13 (November, 1993).

The original Commander Steel, obsessed with carrying on his legacy, subjected his grandson Hank Heywood III to the same procedure that gave him his powers after he suffered an accident. Encouraged by his grandfather join the newly restructured Justice League, even lending them a bunker for use as their base of operations, Hank struggled to adapt to life as a cyborg and clashed with the older JLAers. In the last days of the League's Detroit era, Steel was mortally wounded by one of Professor Ivo's robots and placed on life support by his grandfather; Despero, seeking revenge against the League, tracked him down in this state and ripped him limb from limb.

In the New 52 continuity reboot, Hank Heywood Jr/Captain Steel is an Earth 2 hero, who is something of a Composite Character of all three Heywoods (a soldier like the first Steel, a descendent of Hank Henshaw Sr given his implants by his slightly insane [grand]father like the second, and bonded to a weird metal like Nathan). 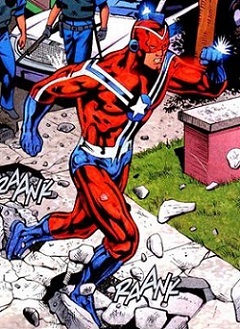 Nathaniel "Nathan" Heywood is the cousin of Hank Heywood III. He had lost his lower right leg after a football injury. During a reunion, Nathan's family was attacked by the aryan group known as the Fourth Reich. During this time, he stabbed the villain Reichsmark in the throat, causing the villain to cough up his molten metal blood on him. The blood was absorbed into Nathan's skin, turning it and his bones into metal (even regrowing his lost leg). It also gave him uncontrollable Super Strength, requiring him to wear a specially-forged metal "skin-suit" to restrain it. He later went on to join the reformed Justice Society of America, but as Citizen Steel, to distinguish him from John Henry Irons.

Nathan, renamed Nate, is a main character in the second season of Legends of Tomorrow, played by Nick Zano, with his grandfather Hank appearing in the opening two-parter.