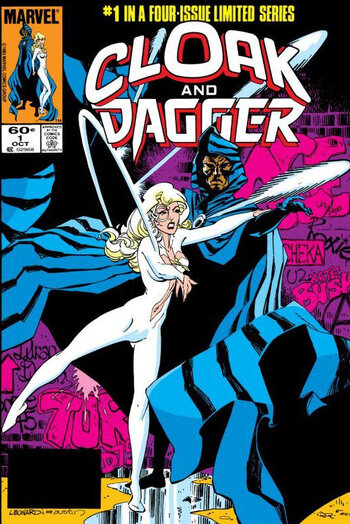 The Marvel Comics characters of Cloak and Dagger have had five self-titled comic books so far:

Cloak and Dagger Vol 1 (1983–1984) was a four-issue mini-series written by Bill Mantlo, with art by Rick Leonardi. This was Cloak and Dagger's first mini-series and introduced a number of recurring characters, like Father Francis Delgado and police detective Brigid O'Reilly. The story was about Tyrone and Tandy trying to live in the harsh city and help people with their powers, even while those powers go astray. The fourth issue told their full origin story.

Cloak and Dagger Vol 2 (1985–1987) was a continuation of the mini-series, still written by Bill Mantlo, with art by Rick Leonardi. Their series continued the story of Tyrone and Tandy, as well as the story of Brigid O'Reilly, who dies and then becomes Mayhem. The series lasted eleven issues and contained a tie-in to Secret Wars II.

Cloak and Dagger Vol 3 (1988–1991) (also known as the Mutant Misadventures of Cloak and Dagger) was written by Terry Austin, with art by Dan Lawlis. It took on a more supernatural bent, with them fighting against the evil sorcerer Mr Jip, the villainess Ecstasy, and even participating in the crossovers Inferno (1988) and Acts of Vengeance. They also gained a new friend in police detective Rebecca "Rusty" Nales, a friend of Brigid O'Reilly. The series was later co-written by Steve Gerber, with artwork returning to Rick Leonardi. The series lasted nineteen issues and, ironically, the last issue retold their origin, just like the original mini-series.

Cloak and Dagger Vol 4 (2010) was a one-shot written by Stuart Moore, with art by Mark Brooks. Now members of the X-Men during the Utopia era, Cloak and Dagger struggle to fit in.

Cloak and Dagger Vol 5 (2018–2019) was a six-issue mini-series written by Dennis Hallum, with art by David Messina. Tyrone and Tandy have drifted apart and a new villain, the Grey, decides to take advantage of this.

Also, the characters had a two-season TV adaptation, Cloak & Dagger (2018), as part of the Marvel Cinematic Universe, which moved them to New Orleans and changed their powers and backgrounds a little.