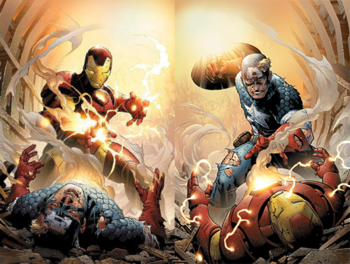 Iron Man's pretty sure this is the right way to handle things. Although, so is Cap.
Advertisement:

The New Warriors, during the filming of a Reality TV program, unthinkingly start a fight with several fugitive supervillains (including Nitro) in the middle of a suburban housing development in Stamford, Connecticut. Nitro quite literally explodes — killing all of the New Warriors (except Speedball) and 612 civilians, including the entire population of an elementary school.

This sparks a flurry of anti-super feelings in civilians. In the wake of House of M (the previous Crisis Crossover) and Secret War, Congress decides they have to act to control all metahumans, and the Superhuman Registration Act (SHRA) is passed. Although different individual comics in the crossover treated the act in slightly different (and occasionally inconsistent) fashionsnote For the entire event, Marvel's editorial staff refused to lay down any rules on the actual wording of the Registration Act, their excuse being that it would be "too complicated" to understand., the most commonly used presentation of the SHRA included these features:

Captain America is taken at gunpoint for saying that he plans to refuse to register, though the law has yet to be passed, then forms the Secret Avengers, an underground organization that continues unregistered heroics, and therefore resists the Act. The X-Men declare the whole mess someone else's problem (although they do point out that following House of M, there simply aren't enough mutants in the world to get involved), and Tony "Iron Man" Stark leads a S.H.I.E.L.D. force to help capture all renegade metahumans, hero or villain. The US government, with Stark's concurrence, also puts together a task force of supervillains — the New Thunderbolts — for the purpose of hunting down unregistered metahumans. Some villains like Bullseye and Venom are used for the government-sanctioned hunting down of and crippling of unregistered heroes, with mind implants to prevent misconduct. (Also against all sense, the government hires Deadpool for similar duties.)

The crossover was similar to, but far more extreme than, previous Super Registration Act plots in comics. It is also notable for big changes in the status quo, including The Death of Captain America and the unmasking of Spider-Man (among several other heroes). Despite Joe Quesada (then-editor-in-chief of Marvel) promising that Spidey's unmasking would not be undone via a "magic retcon" (those being his exact words), Spidey's unmasking was retconned as a part of Quesada's wildly unpopular pet storyline One More Day — by literal magic, less than three months later.

Most of the Marvel Universe was involved in this, including The Avengers, the Fantastic Four, the Runaways, and many other heroes. The X-Men were, by and large, uninvolved in the crossover; this is because of the decimation of the mutant population that happened at the end of House of M. However, two of them did join, both of them time travelers — Cable sided with Captain America, and Bishop joined forces with Iron Man. Marvel's cosmic heroes also stayed out of the event as most of them were dealing with the Annihilation event, though Nova was briefly involved afterwards. Another hero notably left out was the Hulk, who was deliberately Put on a Bus in-universe and got caught up in his own Planet Hulk storyline as a result.

In The Avengers: Earth's Mightiest Heroes! episode "The Man Who Stole Tomorrow", the Negative Zone prison "42" makes an appearance although only to incarcerate supervillains. Like in the comics, it was designated 42 because it was Tony Stark's and Reed Richards' 42nd idea for improving the world. Later in "Hail HYDRA!", Maria Hill states that she will talk to the President about registering with S.H.I.E.L.D.. Notably unlike the comics, Stark is against the idea of registering, as seen in his conversations with Hill in the episode "Alone Against A.I.M.", citing among other reasons the Good Samaritan principle.

The event's plot is used as the story in the video game Marvel Ultimate Alliance 2. The Marvel Cinematic Universe had a Pragmatic Adaptation of the event in Captain America: Civil War, downplaying the Crisis Crossover aspect of the story to focus on the conflict between Iron Man and Captain America (although other superheroes are present). Additionally, elements of the crossover were very loosely adapted for the "Avengers Disassemble" storyline in Avengers Assemble, while a more faithful adaptation will appear as the main crux of Season 3.