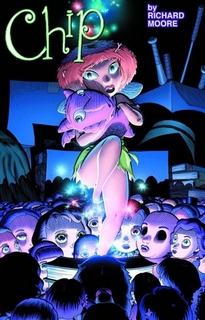 Chip is an Antarctic Press comic written and drawn by Richard Moore (Boneyard, Far West, Fire and Brimstone), set in a modern fantasy world where monsters and humans coexist. It tells the story of Chip, a stone gargoyle created and living on a farm amongst other gargoyles who've either never been sold or are too damaged. Chip is no exception, as he the smallest gargoyle among the bunch—a mere four inches tall. This doesn't get him down, as he vows to be the scariest gargoyle to ever live...though his understanding of the world around him is naive at best. Luckily, his friend Ash, a local pixie, does her best to keep him out of the trouble he regularly gets himself into with his bravado.

Originally a 2-issue mini-series (March-May, 2010). It was followed by the 3-issues-long Chip: Second Crack (September, 2010-January, 2011). It's unclear whether more mini-series are forthcoming.