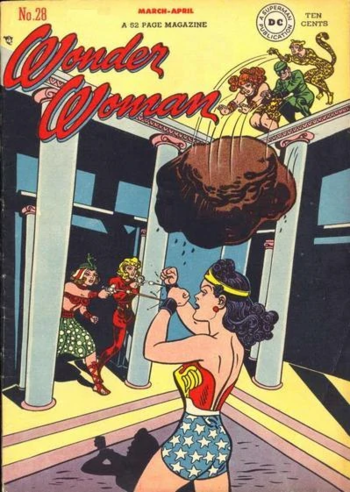 Charles Moulton was a pen name used by Wonder Woman creator William Moulton Marston and his assistant Joye Murchison, who was the second writer for Wonder Woman and first woman writer but was not credited separately from Marston even on issues where he did none of the writing. Their writing paired with Harry G. Peter's art marks the book's unmistakable Golden Age era. Issue 29 was Peter on his own after Marston's death.

Each issue in this era contains three densely packed Wonder Woman stories, which are either three separate unrelated tales or three chapters telling one full tale, which may have large swaths of time between them. These stories are divided by a "Wonder Women of History" short story simplifying the life of a historically important woman into a short comic and a short two page written word story building around a central mystery. The stories in the early issues are almost entirely self contained save for Paula von Gunther's character development, and while all the stories remain easy to read as stand alone entities the final few issues start pulling together an overarching plot concerning the disgruntled slavers of Saturn, who are now out of a job.

Clea would eventually go on to ally with the Saturnian Eviless and join Villiany Inc.