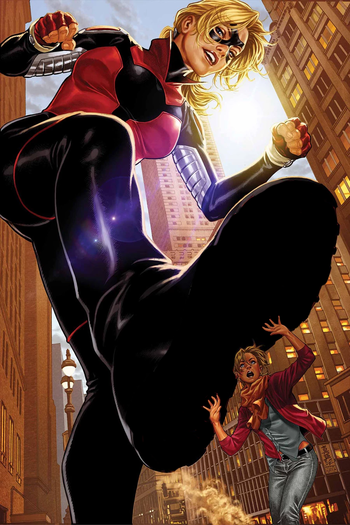 Cassie is the daughter of Scott Lang, better known as the second Ant-Man. In fact, she served as his primary initial motivation to be a superhero, when her ailing health came with medical bills he couldn't quite afford.

After her father was killed during the Avengers' disbandment, Cassie was inspired to become a superhero in her own right, and —after having stolen Pym Particles for years— finally manifests the ability to grow and shrink in size at will, without the need of a suit. With this ability, she becomes one of the very first Young Avengers, christening herself as Stature.

She later joins the Mighty Avengers, as part of the The Initiative started because of the Superhuman Civil War, but unfortunately dies just as her father is brought back to life during the The Children's Crusade.

Cassie's death would remain permanent until 2014, when Doctor Doom (morally inverted from AXIS) resurrects her as reparation for having been responsible for her death in the first place. With a new lease on life, she reunites with her father and later returns to her life of superheroics, this time operating under the name Stinger.

Cassie has appeared in other media, most notably in the Marvel Cinematic Universe, portrayed there by Abby Ryder Fortson and later Emma Fuhrmann. Originally portrayed as a small child as played by Fortson, from Avengers: Endgame onward she's a teenager and time-shifted to Fuhrmann to match.