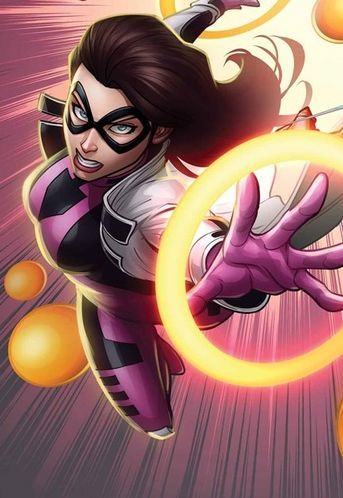 Bombshell, Lana Baumgartner, is a teenaged girl from the Ultimate Marvel universe. Along with her mother, she was a super criminal who robbed jewelry stores. After being apprehended twice, Lana was separated from her mother when the court declared her an unfit parent. Lana then became a student at Midtown High where she, unknowingly at the time, came across Spider-Man sans alias. Peter became one of her first few friends, along with Bobby Drake and Johnny Storm. Spider-Man died a short time later.

She returns, when there's a new Spider-Man in town (Miles Morales) and her backstory is explained. Her powers come from her mother, who was experimented on by Roxxon in exchange for a commuted prison sentence. Lori's escaped when she discovered that she was pregnant, but it was too late and her daughter was born with the same powers. Initially, their powers required both of them to be in close proximity to work, but eventually Lana learned how to use them on her own. She helped Miles, Spider-Woman, Cloak and Dagger to take down Roxxon, and also during the coming of Galactus. When The Ultimates broke up after Cataclysm, they stayed toguether and started their own group, the All-New Ultimates.

The Ultimate Marvel universe was briefly destroyed during the Secret Wars, but the Molecule Man restored Miles Morales' family and friends in the Prime earth, as a token of gratitude. This included Lana, but also her mother, by proxy. Lana would stay a close friend of Miles, and Lori would join the Sinister Six. Lana would also join the Champions since volume 3.

Has no relation with DC Comics Bombshells, an unrelated comic book from DC Comics. She has no relation either with the Bomb-Throwing Anarchists from Nick Spencer's Captain America used to display Political Correctness Gone Mad.