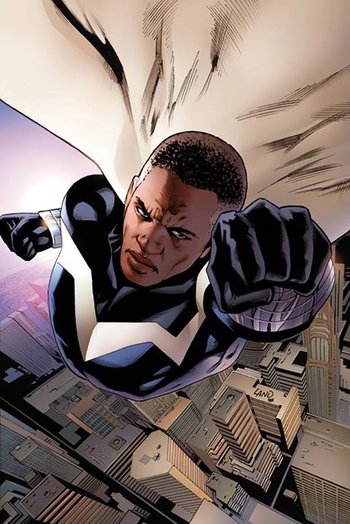 Adam Brashear, occasionally called the Blue Marvel, is a superhero in the mainstream Marvel Universe. He was created by Kevin Grevioux, and debuted in the five-issue limited series Adam: Legend of the Blue Marvel in 2009.

Adam is a veteran of the Korean War who gained tremendous power from an experiment with anti-matter gone wrong. For several years after the war, he protected America as the masked superhero known as the Blue Marvel, until his helmet was damaged during a battle and the country found out he was black. Wary of inflaming racial tensions, the President asked Adam to quietly retire, and he agreed to do so.

Adam stayed underground until the modern day, sharing several secret adventures with his eldest son Kevin and not bothering to use a superhero identity at all. Kevin was eventually sucked into an alternate plane of existence that Adam called the Neutral Zone; Adam and his second son, Max, spent many years trying to figure out how to reach and save Kevin to no avail.

During Tony Stark's tenure as the director of SHIELD, Adam's arch-enemy Anti-Man resurfaced. In an attempt to figure out where he'd come from, Tony declassified the story of the Blue Marvel and got back in touch with Adam, who had retired to teach physics at the University of Maryland. In the ensuing struggle, Adam's wife Candace was killed and Adam, in accordance with her wishes, resumed his activities as the Blue Marvel, albeit without a mask or a secret identity to speak of.

Adam continued to operate out of an underwater base near the Marianas Trench, working mostly outside the United States and continuing his personal research. During the Infinity crossover, he helped to protect New York alongside Luke Cage's hastily-formed Avengers team, and despite some friction with Luke, continued to work alongside him until the events of Secret Wars.

In the modern Marvel Universe, Adam is a member of the The Ultimates, working proactively to keep the world and universe safe. His son Max, a.k.a. Doctor Positron, worked at Roberto da Costa's "Avengers Idea Mechanics", and his daughter Adrienne has a position at the super-science laboratory Project Pegasus.