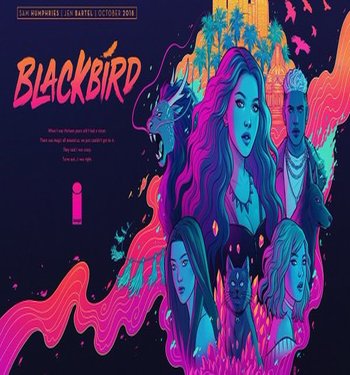 Blackbird is a comic book written by Sam Humphries and illustrated by Jen Bartel, published by Image Comics. The series started in 2018, and the first TP was published in 2019.

Nina Rodriguez discovered magic was real after the big earthquake ten years ago, but no one has ever believed her about it except for what she's read online. Then one night, while she and her sister Marisa are arguing, a giant otherworldly beast kidnaps Marisa. When Nina sets out to rescue her sister, she has to confront the ruthless magical cabals of Los Angeles and confront her past, and she finds out that her life wasn't what she thought it was.