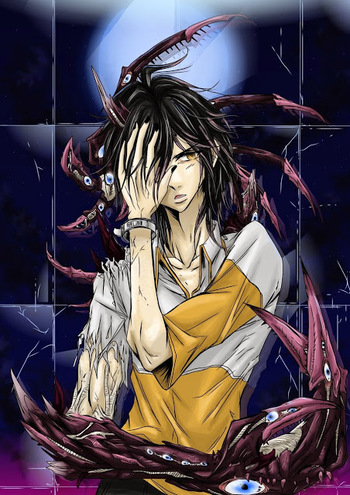 A long time has passed ever since they kidnapped me. I curse the day I choose to leave my home. Truly, that day changed my life forever. Like many, I have wondered: what comes after death? I think I know the answer.
— N°73

Black Tears is an 8 page one-shot published by Mexican author Blackened Krono. It was sent to a one-shot contest hosted by anime review magazine Conexión Manga and chosen as the winner for issue 258 in September 2012.

The short story is about a nameless protagonist, kidnapped by a mysterious organization for its experiments. Our character, named N°73 by one of the doctors, soon discovers that they captured more children to turn them all into what the scientists feared the most: the darkness. N°73, finding out their reason for turning them into monsters, decides to kill them all, and falling to the darkness.

The work hasn't been rereleased nor ever translated to English. You can find the author here

Tropes present in this short story: