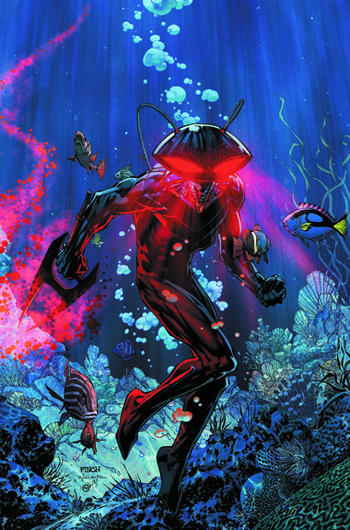 "Y'see, deep down, in my most secret heart of hearts, I'm still a totally depraved sonuvabitch whose main goal in life is to watch you die. Slowly and painfully. Just like your kid."

"No, I mean exactly what I said: "my people." Or have you never wondered why I'm called — Black Manta —? Not that racism is my motive — there's no profit in prejudice — but since blacks have been suppressed for so long on the surface, they fight well for a chance to be "masters" below!"

Black Manta is a longtime Aquaman foe and a prime candidate for the title of his Arch-Enemy. A sociopathic Psycho for Hire and pirate who's dedicated his life to ruining Aquaman's after the hero accidentally killed his father. Dressed in a combination scuba suit and Power Armour, Black Manta's most infamous act was undoubtedly killing Aquaman's son.

As Aquaman's most famous foe and one of the most popular villains of the DC Universe, Black Manta has appeared plenty of times outside of comics: